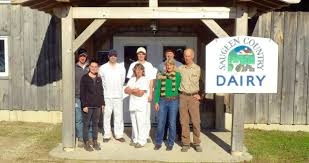 Saugeen Country Dairy
Contact: Schneider, Johannes
Address: RR1 Markdale, ON, N0C 1H0
Email Address: johannes@saugeencountrydairy.com
Phone: 519-369-5836
Website: http://www.saugeencountrydairy.com/
About Us
Since the fall of 1994 we have been making organic yogurt, and now kefir, with milk from our cows. Right here on our farm. We farm about 560 acres of rolling land in Grey County between the towns of Durham and Markdale, Ontario. The landscape was formed by the last ice ages and when the glaciers receded they left behind a good amount of stones that we still have to deal with every time we till the land. The elevation (about 370 meters above sea-level) makes for a fairly short growing season with the last frost around the 20th of May and then the first killing frost of the fall at about the 25th of September. Also there are a lot of areas that are too steep, rocky or wet for cultivation. The combination of these factors make this part of the country less desirable for modern large scale farming, but at the same time left it ecologically more intact than many others.
Practices
Yogurt has a long history (since about 2000 BC) as a nutritious and healthy food. By fermenting the milk with yogurt culture, people created a tasty food that could be stored for a long time. Since it is fermented, yogurt is a very stable product, not prone to bacterial contamination.

Kefir is a fermented milk product with a delicious taste that is enjoyed throughout Europe for its unique flavor and health benefits. Kefir has a consistency lighter than yogurt, but different because of its carbonated nature and characteristic tangy flavor. Kefir, whose name comes from the Turkish word for “well-being,” has a long history of use in treating everything from stomach ulcers to pneumonia. Originally made by fermenting milk in sheep hide bags, it is now made by adding culture to the milk. The resulting kefir contains naturally occurring probiotic bacteria that offers health benefits. On top of being packed with nutrients, kefir is easily digested and can help to relieve common gastrointestinal problems, including lactose intolerance and irritable bowel syndrome. It is an extremely high source of protein and calcium, and rich in B vitamins. Kefir can be used in a multitude of recipes or enjoyed by itself as a beverage or with a spoon.

The cow herd is absolutely central to the farm and in a sense we owe them everything. In earlier times the cows pulled the wagons and plows of the settlers; they still feed and clothe us today and, above all, they sustain the fertility of the land in which all our food crops are grown.

On our farm we keep a herd of a little more than 50 milking Holsteins, one or two breeding bulls and about 50 head of young female stock or heifers. We raise the heifer calves to replenish our own herd and if we have too many we sell them to other farmers.

The baby calves are raised on whole cow's milk and after five months, when they have started to eat enough rolled grains and hay, they are weaned off milk and start living the life of a ruminant in earnest. After about two more years the heifer should give birth to her own first calf and graduate to being a milking cow. The cows are milked and fed in a large, timberframe bank barn. Their feed consists primarily of fresh grass and rolled grains in the summer and alfalfa hay, silage and rolled grains in the winter. They get a mineral supplement and salt to meet their nutritional needs. During the summer months the herd spends a lot of their time in pasture, coming in only for milking. They spend most of the winter in the barn, but still go outside for fresh air and exercise.
On average each cow gives about 25 liters of milk a day and they do this for 300 days a year. They get two months off for maternity leave, what we call the 'dry period.' Then, with the arrival of the new baby calf, the cycle starts all over again. A cow has to regularly give birth to a calf to continue to produce milk. Her gestation period lasts for 9 month and 9 days. She will usually have a calf every year.